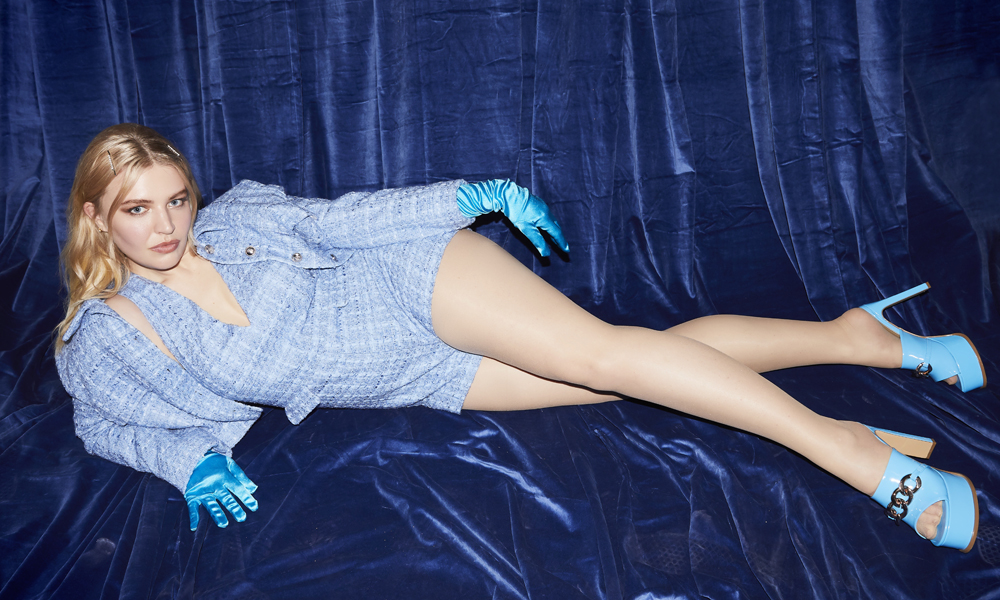 New album, 'Prioritise Pleasure', out 22 October - On tour across the UK throughout November

It might look like Rebecca Taylor has reinvented herself as an artist, but if anything, she’s done the complete opposite. The Sheffield native first made a name for herself as half of folksy indie duo Slow Club, but spent over a decade conforming to what was expected and demanded of her as an ‘indie band girl’.

Going it alone in 2017, Taylor decided that she was going to do things for herself, no matter what, and set about making the music she wanted to make and looking the way she wanted to look, with the result being Self-Esteem. Blending pop and noughties-era R&B with often abrasive noise and deeply-personal lyrics that draw a line in the sand against the misogynistic culture that is all around us, she has emerged as one of the most vital and exciting new pop stars to come along in a very long time.

Now, following on from her acclaimed 2019 debut album Compliments Please, comes the astonishing Prioritise Pleasure. An easy contenter for album of the year, it sees her taking everything she has done so far and cranking it up another few levels. For Rebecca, it’s just the natural progression of everything she has been working towards since she struck out on her own.

What did you want to achieve with the new album and did you manage it?

“It had been a long time coming to get to make a solo record, so I was really happy with how it all turned out and every single second of touring it, I found myself just so glad to finally be able to be doing what I wanted without anybody saying no. It didn’t sell loads though, so there was a feeling around some of the people that I work with that it hadn’t worked, but I personally felt so successful and happy just to have done it. I could have lived like that forever. I don’t need to be famous or anything, I just want to make my own art, uncontested. So I went in the studio a bit crestfallen, but in the past I’d have worried about having to try and make a hit, whereas this time I realised that I don’t give a sh*t anymore. My attention was just on making exactly what I want to make, as I have nothing to lose because I’m free. I know there’s enough people who are into Confidence Please that will let me do a tour, so I don’t need a hit, I don’t need this massive idea that’s going to change my fortunes, I just need to make what’s authentic to me, which is what I did. Of course, it’s all going really well now. All those times I’ve laboured over things and it’s the time I don’t that works.”

The album has a real confidence to it. Is that something you are feeling more of now?

“I’m 34, I'm growing up and I’ve wrestled a lot of shit out of my life that’s helped me get to this point. I’m less worried and bothered by everybody else now, which is something I think that just naturally happens when you grow up a bit. But also I think I’ve finally understood that I’m doing it and living the dream already. Previously I’ve always been thinking that one day I’ll have that thing and everything will change for me. I think the pandemic helped with that realisation. I am an artist full-time and that is all I need to be. The gratitude for that helped me be a lot less bothered about what people might think, so it’s a combination of both those things. It sounds like confidence and I am in many ways, but it’s also a huge amount of apathy towards trying so hard for everyone else in the f**king world. Making it just about me, my life and my work, I think that’s the origin of confidence. It’s like when my mates ask ‘how do I make him fancy me?’, I always just tell them to believe that they are f*cking fit. It’s just an attitude. It’s the same with music, I think Self-Esteem is the best f**king thing ever.”

There’s a real punk attitude to it all, not least of all the lyrics, as you really have a lot to say, but it’s almost by stealth as it’s backed by very catchy pop music. Is that a deliberate way of doing things?

“I cut my teeth in Slow Club and we used to tour The Mae Shi, who were my favourite band. I went out to America to hang out with them and they were a full-on downtown LA punk band. So it’s in me to be punk or whatever, but my aesthetics and genre is pop and hop hop. How I came to music is through a punk way of being, though. I remember being so frustrated in my old band that we didn’t say loads of things and that the shows weren’t these all-consuming things, like the Mae Shi ones were. They are still a really big inspiration to me. To be honest, I think pop is punk, anyway. It’s just as powerful and punk is about being radical and saying something more than the song, which a lot of pop does too, especially these days.”

Your time in Slow Club sounds like it was quite oppressive at times. How hemmed in did you feel by what were the standard “Indie girl” constraints?

“It was difficult. My band mate and I weren't a couple or related, so there was always the question of what we were and aesthetically-wise we were very different too. I have always had all these ideas that you can now see coming to light, but it’s very difficult to get a load of people to do that, especially ones that are half of what the band is, so I just had to come down to a level that was manageable for everybody else. I always thought if I was hotter or skinnier, would we have been bigger. It’s plagued me my whole life. Now though, whatever level Self-Esteem is at, is because it’s me. None of that sh*t matters. I feel sad for how much I thought about that throughout my twenties though, but no-one perpetuated it other than everyone, like society in general. It was tough, really tough. My whole identity got lost for many years and now being myself and seeing the benefits of it, is like...wow. That indie era of one girl in the band, there needs to be a support group or something. We were all girls that were like ‘boys’ girls’, I wanted to be the only girl, but as I grew, learned and had all those experiences, I realised that it was f**king sh*t. There were no allies. I’m thankfully not there anymore, but I worry about people who are. I think the world is changing though, as it’s very in the zeitgeist not to be a d**khead.”

A lot of the imagery and iconography you use for Self-Esteem is very sexual and glamorous, but it never feels that it’s being done for the male gaze and instead is purely for yourself, would that be right?

“Sometimes I don’t have a smart answer for it, as I just want to look hot. I’m under no illusions that these kinds of things will help get the videos clicks from a certain demographic, but while they are watching it are going to have to hear years of frustration and anger at being in the hands of the male gaze or whatever. So to me, that’s a fun multisensory way to get your message out. All of this is a smart way to say what you mean. I’ve done my years of being a very angry feminist who hates men, but I really don’t hate men when it comes down to it, but I still think there’s a lot to be done. So for some of my work, I’m trying to address that and how to do it by explaining the grey area a little bit. And sometimes I’m just angry and other times I’m just having fun. I’m really into iconic imagery, so some of it is very Madonna-inspired, that whole Blonde Ambition era, there’s stills from then that to me are like a Van Gogh. I’m always just pleased to be myself.”

You often take flak for it from women too, who accuse you of not being feminist enough. They’re obviously not getting it, but what’s your response to that?

“I wish I had a smarter answer for that too, but for me, being myself is political, being myself is feminist. So whether I’m naked and gorgeous or suited and booted, it’s still feminism in motion, as it’s me. The far-left is as bad as the far-right, it’s a big horrible circle. Feminism is the same, when we should all be working together. I get sh*t from women that I think are ultimately still addled by misogyny. I need to say what I need to say and be who I am, or I’ll go crazy. That’s all that is happening and as a by-product of that, it’s political and it’s feminist. At the end of the day though, it’s just me.”