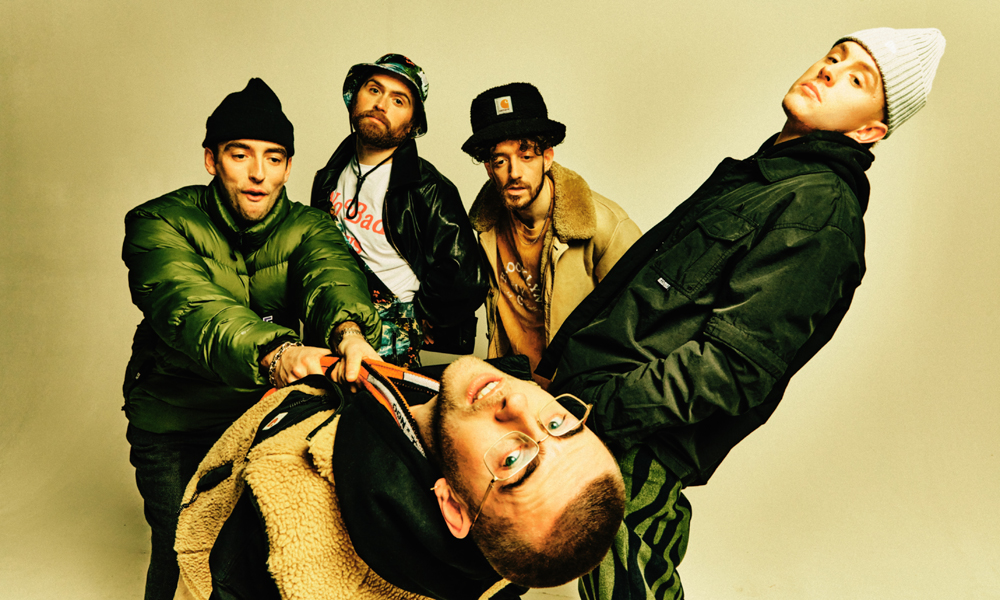 ‘life’s a beach’ The debut album – OUT NOW (Island Records)

It’s been a long time coming, but Easy Life’s debut album is finally here, and the timing couldn’t be more perfect.

The Leicester five piece - Murray Matravers, Oliver Cassidy, Sam Hewitt, Lewis Berry and Jordan Birtles - have been one of the most exciting and promising new bands in the UK since they debuted in late 2017, dropping a string of instant classic singles and mixtapes that somehow managed that rare feat in music, with each release being a huge step up from the last.

It’s no surprise then, that Life’s A Beach, their long-awaited first proper long-player, is already a contender for album of the year. Their unique and very English take on R&B and hip-hop is taken to the next level, with a collection of tracks that see the band refining not just their sound, but their whole approach. It’s a joyous, optimistic and very much positive record, but it’s all shot through with frontman Matravers’ signature realism when it comes to the lyrical content. It’s a record that recognises the negatives of the world and everyday life, but at the same time provides a soundtrack to dealing with them. Standard Easy Life, in other words.

Murray said: “For me, it’s about coming to terms with your flaws and the flaws of the world, then trying to be at ease with those things. I think something that Easy Life tends to do is pose a problem, like asking why the world is so awful at times, then concluding that if you can’t change certain things, do your best to deal with it, but say it with a smile on your face. I want the album to be optimistic, but not necessarily happy, which is something we do quite well, I think. I’ve always been one for trying to grit my teeth and bearing it, just dealing with things without being too dreary. It’s optimism, but not in a fake way. I’m not saying everything’s great, because it’s far from the case, but maybe we should just smile, come to terms with it and perhaps things will get better at least. If they don’t though, let’s try and have a good time, anyway. That’s how Easy Life formed in the first place, we were just trying to make the best of our lives at a time when we were pretty much going nowhere. That’s what we’ve always been about from the get-go.”

Murray’s lyrics have always been as brutally honest as they have been observant, but while they are always coming from a deeply personal place, he knows that what he’s talking about are universal experiences, so knows that they are relatable to the youth that are listening to them.

He said: “I’ve always written from personal experience, whether it’s things I’ve done, felt or just observed, but it’s always things that I’m sure everyone else of my generation and those previously have experienced themselves too. No idea is unique and I’m certainly not unique in that my lifestyle is very similar to all my friends. We’re all in the same place and our experience growing up in Middle England isn’t any different from anyone else in any other city in the UK or outside of it. Young people no matter where they are feel unrepresented, they feel trapped and confused about what to do with their time. We all have the huge face of the internet staring over them, pressuring them to feel and act in a certain way. I’m just talking about how that makes me feel, but I know that everybody must feel the same way, as it’s a natural human reaction to the world as it is. I’ve always genuinely written music for myself as I need to talk to myself about these problems, but hopefully people can listen to me having these private conversations and feel that they aren’t alone with these feelings. Music can really bring people together in ways that other art forms don’t. It’s a very powerful tool for bringing people together and I like to think that Easy Life does that too.”

Life’s A Beach has got ‘Summer album’ written all over it, so the timing couldn’t be more perfect for its release, especially this Summer when people will hopefully be able to finally get together and enjoy life again. It wasn’t planned that way, but for Murray, he’s hoping for the best.

He said: “I feel quite lucky in that respect, as it was finished in December of last year and this was the quickest we could get it out, but I’m not blind to the fact that this feels like the perfect time to release an album that sounds like it does. Hopefully the country will finally open up here, but only when it’s safe to do so. This last year, we seem to have been constantly saying things were okay and opening up more, then going straight back into lockdowns again. So hopefully they don’t keep making the same mistakes on repeat. I’m optimistic though, as I think we’ve almost cracked it. That’s probably a stupid thing to say considering everything that’s happened in the last 15 months, but perhaps good things are just around the corner. That’s what the album is saying anyway, so hopefully it all comes to fruition.”

Normally Easy Life would have been on the road promoting their new record right now, but with current restrictions plans have had to be improvised. After announcing the album in a hot-air balloon over their hometown of Leicester, the lads are planning on a tour of England’s record stores, where they will play intimate gigs and get as up close and personal as is safe for them to do so.

Murray said: “It’s something we really enjoy doing normally, anyway. Obviously, they’re much smaller than regular shows, so they attract the cream of the crop of audiences, as in the hardcore Easy Life fans who won’t ever miss anything. So it’s nice to connect with them, to be able to say hello and thank them for all their support. The gigs are always great too and from a selfish point of view, we need to remember how to gig and how to tour, so it’s nice we can do that in front of 100 people instead of 1000. We’re really excited about the prospect, as it’s been a while. I’m sure it’ll come back to us though. It seems mad even talking about it, as it’s been an impossibility for so long, but hopefully it all goes ahead. I think it’ll be really important for everyone there, for us to play a guy again and for the fans to be part of one. What it symbolised is that we’re all in a room and listening to music together again, after all we’ve been through. We’ve done it. This could be the start of the end. If it happens there’ll be a really positive vibe in the room, and I think we all need that more than ever. I’m really looking forward to it.”

Naturally their first priority is people’s lives and health, but Easy Life are understandably champing at the bit to get back out on tour properly, which all things going well, they’ll be doing in November. Not only that, but they’ll be playing their biggest tour yet, with some venues included in the itinerary that they still can’t quite believe they will be headlining.

Murray said: “We are so excited to properly get back out there. I cannot wait to get to play those venues in particular too. We’re playing the Barrowland in Glasgow and the Academy in Brixton, for example. Two of the best and most iconic venues in the world. The fact that we’ve got to this point is mad, it feels like we’ve completed it. We talk about it in the band all the time. All we want to do is play live gigs, it’s all we’ve ever wanted to do. We’re so lucky, we really are. To get back out there and to be going into a tour on that level is mind-blowing, it really is. Plus, we have a new album that we’ve never played almost any of the songs from live before, which is a really exciting, if weird feeling. Normally we’d have road-tested them all and seen the reaction, which you can’t help but be influenced by, as some things work and some don’t. This time though, it’s going to be songs that are purely coming from us.

I just want to keep writing music and putting it out there. After everything that’s happened, I think the best thing is to just keep walking around with your eyes closed and see where you end up, so I’m going to do just that and hopefully it all works out. “