It has been a dream of mine to go and see a professional basketball game and what better way to start than by supporting the Sheffield Sharks.

The atmosphere was lively with a filled out stand of people ready to cheer on their beloved team. A crowd that sat in anticipation on the edge of their seats ready to witness an exciting game - Sheffield Sharks vs Cheshire Phoenix.

The first quarter began with a, dare I say, slightly shaky start but it was nothing a regrouping in time out couldn’t handle. Chanting and clapping filled the room and the sound of jaws in the background prepared the Sharks for a basketball battle. A sudden rise in confidence in the Sharks and fear started to settle in for the Phoenix team.

The buzzer sounded and it was 12 - 22 to Cheshire Phoenix.

Into the second quarter we saw a change in the Sharks and they were ready to take over. Passes were perfectly executed, shots were on target and the movement on the ball was smooth and effective. In every time out or section of the game Dance Daze would entertain to ensure the crowd remained excited and ready for the game. With 3 minutes and 2 seconds left of the second quarter, the Sharks entered the lead 31 - 29. A well deserved take over with the players remaining focused.

The score after the second quarter into half time was 39 - 33 to the Sheffield Sharks.

After a 15 minute half time the Sharks were back. Their energy was eye-opening and their commitment to the game was evident. The third quarter zoomed on by with a retained lead.

Sharks remained in the lead after the third quarter, 55 - 49.

The final quarter began and the crowd was electric whilst cheering on their teams. We were ready for a challenging last step and it delivered. Back and fourth, back and fourth - each teams’ score creeping up. Phoenix eventually took the lead and the Sharks couldn’t quite grasp the win.

It was a lively game, and both teams deserved their chance at the win. The Sharks played incredibly well and I hope that they can keep their heads held high as they go through the league.

Alpha Plus were the sponsors of this game. 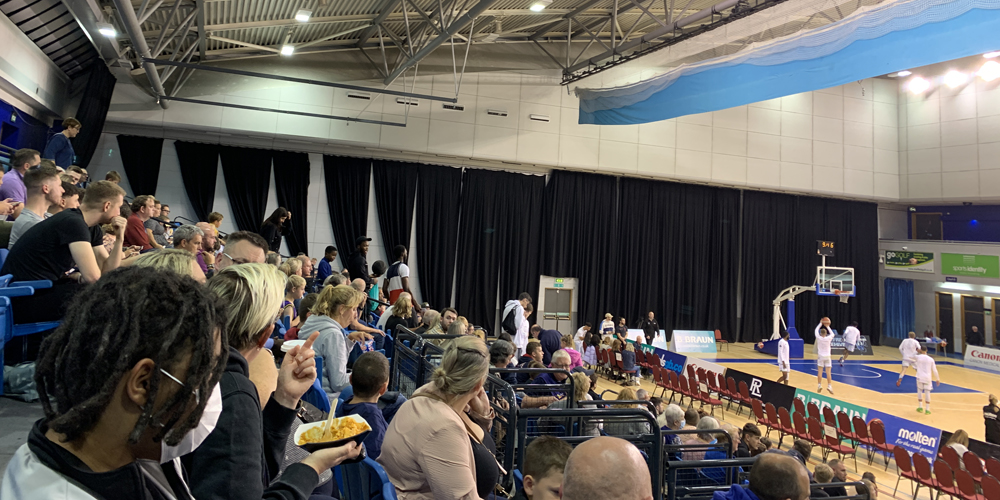