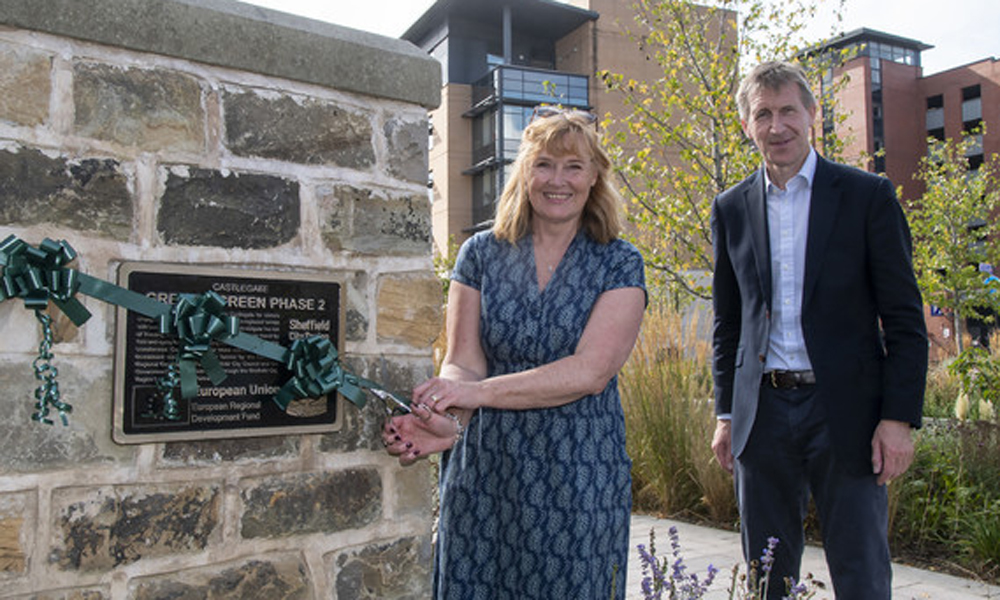 A ceremony took place at the Castlegate Festival on Saturday 18 September to celebrate the completion of Sheffield City Council’s Grey to Green Phase 2 project.

Hotels, businesses and residents in Sheffield’s historic Castlegate now enjoy a transformed outlook and setting of gorgeous greenery, while walkers and cyclists have easier access to the city centre.

The scheme links Castlegate to the under-visited ‘hidden jewel’ of Victoria Quays and has transformed the almost redundant former inner ring road from a barrier to a green corridor with sustainable drainage, floral meadows, segregated cycle lanes and public art. A separate part of the scheme has significantly improved Snig Hill and the approach to Castle House Kollider and Kommune.

Redundant road space from Park Square to Blonk Street, once part of a seven-lane Inner Ring Road dual carriageway, has been reclaimed to provide quality areas for pedestrians and two-way cycle facilities with a new 20mph speed limit in place.

Bus routes have been shortened and several long-distance cycle and walking routes into the city centre from the north and east connected, including the Five Weirs Walk, Canal Towpath, Upper Don Trail, National Cycle Route 67 and Sheaf Valley Park.

The new public spaces provide a much-improved setting for the seven hotels in Castlegate – the largest concentration in the city centre.

Castlegate (the Street) has been closed to vehicles to create a large riverside terrace with potential to accommodate outdoor seating for existing and future cafes and bars including the former public toilet due to open as the Two Rivers Bar and the Tap and Barrel, now under new management by the Peddlers Market team. The street will also hold the newly established Sheffield Pollen Market, the first fresh flower market in Sheffield, which will take place every third Sunday of the month. 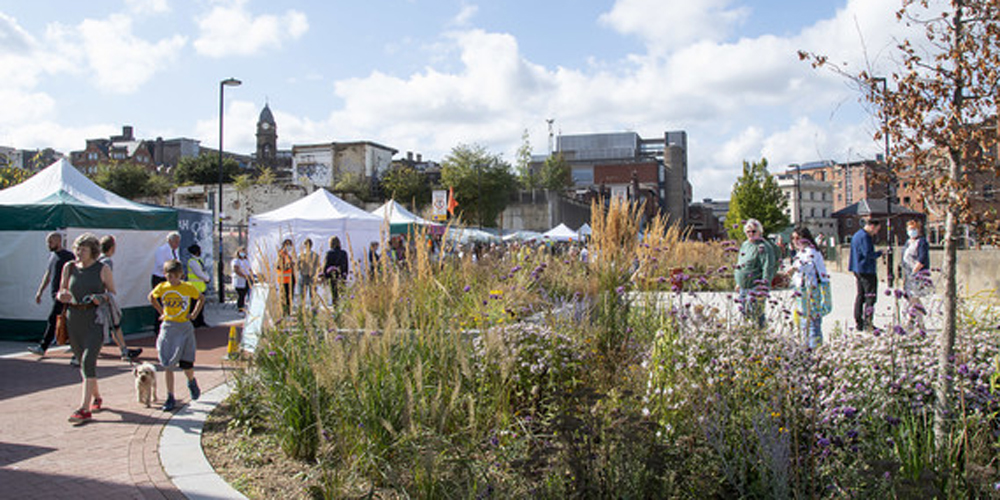 The project has also improved resilience to climate change flooding in the area, providing large porous planting areas to soak up and hold back surface water in heavy rainfall in an area which suffered badly in the 2007 floods. Along with Phase 1 at West Bar this is believed to be the largest ‘retro-fit’ scheme of its kind in the UK and has drawn much interest from other towns and cities as well as international visitors from the US and China.

Fifty-seven new trees have been planted as part of the scheme, along with a multitude of low maintenance perennial meadow plants and bulbs which will provide a year long succession of colour and natural habitat for insects, birds and mammals.

The scheme includes four distinctive, specially designed ‘totems’ containing ‘bug hotels’ which provide places for bees and other insects to thrive, along with nature and heritage insights.

The Exchange Street area, previously known as Exchange Square or New Haymarket has a long and rich history. It once contained the castle orchards and the original Shrewsbury Hospital but by the mid-19th century it was one of the most important public spaces in Sheffield, surrounded by the grand Corn Exchange, the Norfolk Market, the 4,000 seat Alexandra Music Hall and the Smithfield Fairground. Sheffield’s Town Hall, Courts, Canal Basin and first mainline station at Victoria were also close by. Grey to Green starts to bring back some of that civic pride in the area.

The new public spaces allow outdoor events to return to the area, such as the Castlegate Festival which delivered a whole programme of events and attracted many visitors to the area over the last two weeks. This weekend saw the Canal and River Trust’s Waterfront Festival take over Victoria Quays, with hundreds of people enjoying activities on the water, live music and entertainment, and a variety of stalls.

The final phase of Grey to Green is currently on site on Angel St and is expected to be completed in early 2022. 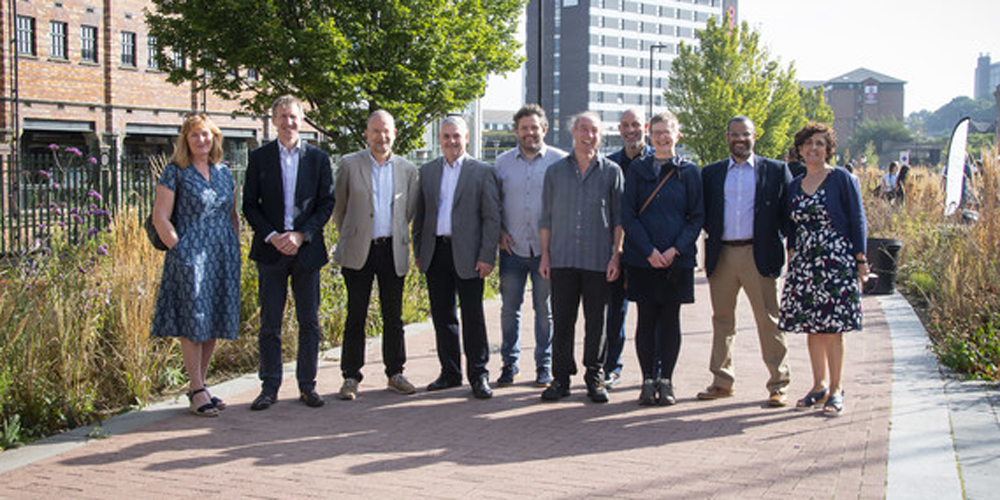 Cllr Julie Grocutt, Deputy Leader at Sheffield City Council, said: “The first phase of Grey to Green has justifiably won awards and attracted interest from cities around the world. It is a beautiful corridor of colour which looks good all year round. I’m thrilled this success story will now extend into the city’s ancient and historic heart and provide better connectivity to the river, canal basin and Castlegate itself.

“By working in partnership, we are delivering another world-class scheme which is already transforming this part of the city into a vibrant area once again, and with our continued investment and development, will only get better.”

Cllr Douglas Johnson, Executive Member for Climate Change, Environment and Transport said: “Grey to Green is delivering on so many of our priorities and is the perfect scheme to celebrate during national action on climate change week, the Great Big Green Week.

“Not only does it create beautiful spaces, but environmentally it benefits our air, increases the biodiversity of wildlife in and around our city centre, supports our work to reduce flood risk, and creates better opportunities for active travel. The new cycleways in this scheme link up more of our neighbourhoods with routes into the city centre and this will expand further when phase three on Angel Street completes next year.”

Dan Jarvis, Mayor of South Yorkshire, said: “This project is a magnificent example of how, if we put our minds to it, we can create a scheme which tackles a multitude of problems in an innovative way that puts nature, active travel and beauty back into the city centre. In two short years this part of Sheffield has been transformed. It’s been a pleasure to support this scheme with funding, and I congratulate Sheffield City Council and all the partners involved.

After attending the opening ceremony for phase 2 of the scheme, Paul Blomfield, Sheffield Central MP, said: “The City Council has done a brilliant job conceiving and delivering this transformational scheme. It’s already attracting investment and rightly winning praise for the commitment to sustainability. Thanks are also due to the City Region and the European Union for the additional funding that made it possible.”