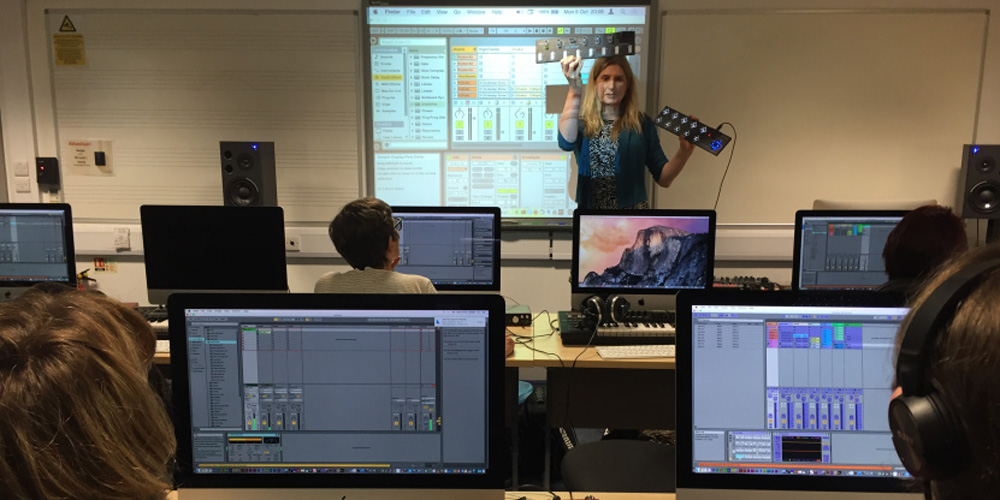 Playing music with tulips and electrical currents, producing a live track using intricate computer coding or sitting down with tea and cake and discussing the latest equipment. It’s all in an evening’s meet-up for the Sheffield branch of the Yorkshire Sound Women Network (YSWN).

The Sheffield off-shoot was born at the beginning of 2016, a few months after the first YSWN group was set up by the network’s chair Liz Dobson, with the aim of creating a community for women and girls to engage in the exploration of sound and music practice.

In her blog, Liz says she started the YSWN ‘to create a network offering both mentoring and access. A place for women and girls to engage unself-consciously in the exploration of sound and music practices’.

Since its inception, the network has encouraged women and girls to take risks with technology and offer informal mentoring to each other, and the ladies are on a mission to contribute towards accomplishing genuine inclusivity for women in the music and sound industries.

In its first year, the network has hosted expert-led sessions, workshops and informal meetups for women and girls involved in music and sound technology.

The Sheffield branch of YWSN meet in a café beneath a disused nightclub at Sheffield’s DINA venue every first Thursday of the month. The group includes women from all walks of life, with different skills and interests within music.

Amy Beeston, a co-founder of the Sheffield group, thinks it is important to address the imbalance in music technology, a traditionally male-dominated industry.

She said: “While there was loads of YSWN stuff going on in other cities, we wanted to bring a little bit of the magic to Sheffield.

We come from a wide range of backgrounds, from complete beginners to industry professionals. It’s a great environment to meet people with similar interests, and to talk about sound and music technology in an informal setting.

In a typical meeting, we'll probably discuss somebody's work over tea and cake. We might also share skills and hear about upcoming gigs.”

The Sheffield YSWN have got exciting plans on the horizon and will be hosting a series of workshops during the year-long Catalyst: Festival of Creativity, as part of the Sheffield Year of Making celebration. The event will feature exhibitions, workshops and talks around the theme of Sheffield’s history, health, vision for the future and new artists.

To find out more about the Sheffield YSWN visit their website.