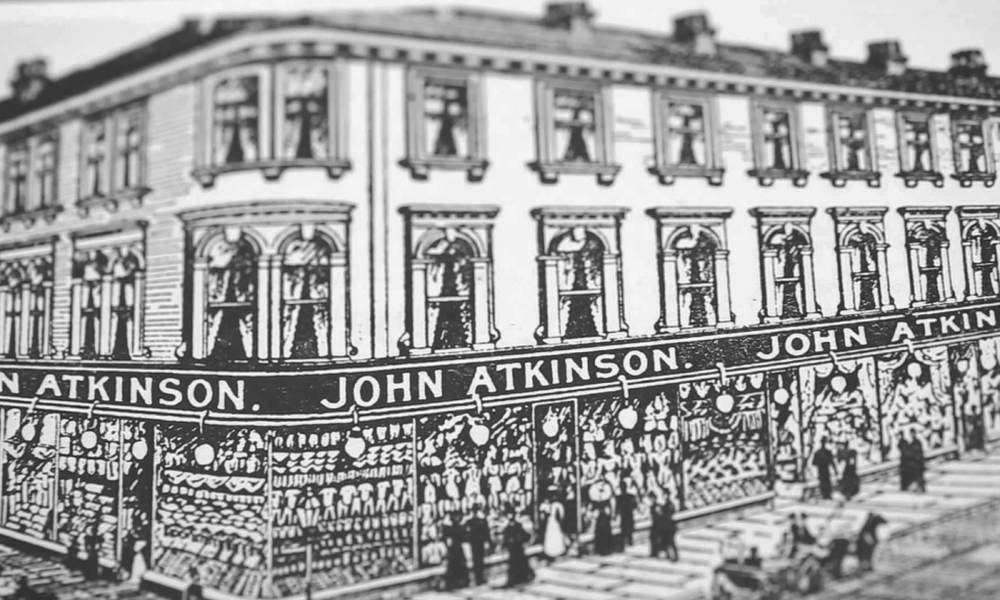 Atkinsons stands proudly as the only remaining department store in the city. This year it celebrates its 150-year anniversary. Richard Abbey discusses its history, and legacy, with Managing Director Nicholas Atkinson

If you're from Sheffield, chances are you have fond memories of Atkinsons department store. For me, growing up in the 1980s, it's of 2p rides on Muffin the Mule (which is still there by the way), Saturday trips for our weekly shop in Sainsbury's or, if I was really lucky, an ice cream sundae in Massarellas.

This year, Atkinsons is celebrating its 150-year anniversary. It seems apt to be celebrating the longevity of a Sheffield treasure in the year we are also celebrating The Queen's Platinum Jubilee. Whether Atkinsons' festivities will reach the levels set by Her Majesty is yet to be confirmed but they will be marking the occasion with special offers throughout the year, including a big giveaway - you'll need to keep your eyes peeled for that.

Following the recent closures of Debenhams and John Lewis, Atkinsons remains the only department store in the city and also remains defiantly independent, overseen by the fourth generation of the Atkinson family, Nicholas, who himself is celebrating his 50-year anniversary at the beloved store.

Atkinsons was started by Nicholas's great-grandfather John in 1872, starting life as a small drapery store at 90 South Street, the former name for The Moor. John originally came from a farming background near York and came down to Sheffield to seek his fortune.

Over the years, and before the turn of the century, the reputation of his two-windowed store grew and he was able to purchase neighbouring properties before amalgamating them into one magnificent 'proper' department store. It was something like Sheffield had never seen before; the three-floor property had a huge glass atrium on the roof to let light down on to all the floors and it was full of plants, so much so they had to employ an in-store horticulturalist. Its myriad departments extended far beyond the buttons and braid John originally started selling when he set out.

John sadly passed away in 1929 but the business remained in the family with Nicholas's grandfather and brother, Harold and Walter, taking over before his father Peter and uncle John joined the business after serving during the Second World War. Unfortunately, John died early and his father was left to run Atkinsons solely until Nicholas joined the business himself in 1972.

To keep the business evolving, Peterstruck up a friendship with John Sainsbury and persuaded him to open one of his grocery stores connected to Atkinsons. At the time, Sainsbury's were largely unheard of in northern England so it was something of coup. The supermarket opened in 1974 and remained on site until it's closure in 2000.

"My father and John [Sainsbury] became good friends and they built their supermarket, which was on our first floor level, and that was massive boost in the arm for us," Nicholas recalls.

"Sadly, on 1 April 2000, the area, which had 26 checkout points, closed and we lost two million customers overnight per year We took over the space and the car park, diversified and increased the number of departments we had. The rest is history. It's never been an easy ride."

The loss of Sainsbury's is just one of many setbacks that Atkinsons has overcome in its 150-year history. Perhaps the most significant was the devastation caused during the Blitz of December 1940 when an incendiary bomb completely levelled the store.

"We were left with nothing, absolutely nothing. The only thing that was left were the pennies in the weighing machine," said Nicholas.

It was catastrophic for the family but, undeterred, they vowed to start over again setting up a temporary HQ at St Judes Church in Milton Street. It wasn't until 1960 that they were able to rebuild the store on its former site. 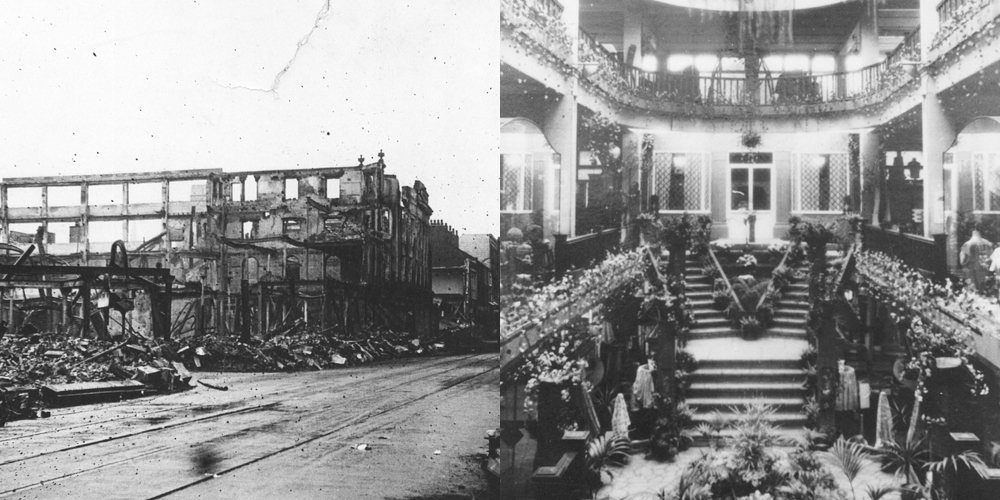 Under his stewardship Nicholas has also had to contend with the opening of Meadowhall, which drew potential customers away from the city centre, and the worldwide recession of 2007-2009. But he credits his most difficult time as the last two years and the impact of the pandemic.

"That first year, 2020, when we had the first lockdown, we were forced to close for 26 weeks out of 52, so half the year. Nobody can make a viable situation out of those kinds of figures," he said. "And of course none of us had experienced this before, we didn't have a clue what was around the corner.

"Then we came into our second year and we had another 12 weeks when we were forced to close and that was bad enough. When we got back, which was about March time last year, we had quite a good run, people were relaxing a bit, and then we had this new variant, Omicron, and the whole thing started all over again. The restrictions came back , the fear came back, and it was the run-up to Christmas. It had a massive impact and just wrote another year off."

"Although the government funding was pretty good generally speaking, and you have to be thankful for that, it has been an extraordinarily difficult time," continued Nicholas. "We're very fortunate, but it's come at a cost. We've come out of Covid leaner, keener, fitter… it focuses you. But it took its toll on everybody."

And Covid didn't just impact Atkinsons but the city centre as a whole, although Nichols feels very fortunate to remain at the heart of The Moor.

"While we were closed we had the demise of Debenhams and John Lewis leaving the city, which wasn't good news at all. If you're going to have a strong city centre you need to have shops that people want to come to," he said. "The Moor is alive and kicking and has had significant investment. We're very fortunate to be in the right place at the right time.

"This has come after a lot of hard work, it hasn't just happened. I always remember doing a [Yorkshire] television interview on a rubble site at a strange place called Meadowhall in 1989, just before building started, and the Professor of Retail at Sheffield University didn't hesitate in telling everybody that The Moor wouldn't exist in five years time. I think that comment galvanised me into making sure that didn't happen.

Nicholas puts the success of Atkinson's longevity down to the same ethos his great-grandfather had when the shop first opened - quality, value and service.

"People who shop here love the experience, it's something they enjoy because people talk to them," explains Nicholas. "Retail lost that years ago but we managed to keep it. I think that's a lot of the reason why we're still here."

He is of course backed by a tremendous team, many of which have been there for many years too. He credits them with all playing a part in the success of Atkinsons and feels the company is in safe hands for many more years.

"The people who work here are as committed as any family member and I see them as family," he beams. "We'll move forward that way. They're a great bunch and I try and keep on top of what's happening to them, both at work and personally. It's not an effort it's an enjoyment. There's complete trust here and that's why it's a family business and it's very nice that is still run like that."

If the last two years have shown us anything it's that shopping local and supporting your independents, however big or small, has never been more important. It's the only way they will continue to trade and let's be honest, we've all missed that personal touch so championed by stores like Atkinsons. Today it occupies 75,000 sq ft of retail space, has 40 departments, three restaurants and 440 parking spaces. It's a true Sheffield treasure and should be cherished  for many years to come.

"We've had to adapt our business to what's going on outside," concludes Nicholas. "At the end of the day, this business is about making a profit and that has become increasingly difficult over the years. But I feel that with the changes we've made since the start of Covid, we're in the best position for moving forward." 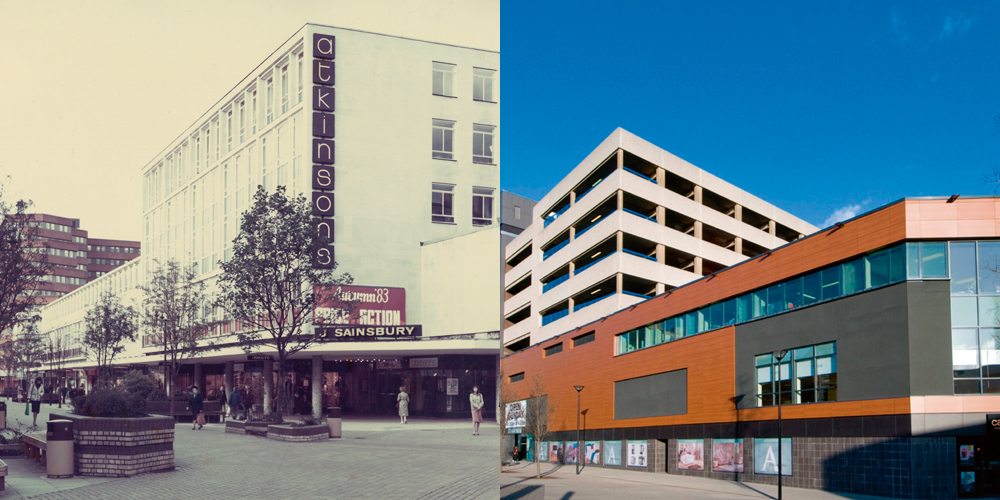