There's a place I know in Sheffield... Houndkirk Moor The road that travels back in time

We've all got our favourite Sheffield places - from the park where we played as kids, to the pub where we had our first pint. Here we take a look at an ancient road that takes you on a journey through the ages.

You don’t have to look too far in Sheffield to see traces of its long history, but how many of the people who now use one of the city’s most popular outdoor playgrounds are aware of the intriguing nature of the landscape they are in.

There are echoes of everything from ancient temples to World War II on a road that leads back into the mists of time.

Head up Ringinglow Road in the south-west of the city, hang a left on Sheephill Road at the Norfolk Arms and after 100 yards or so you are at the bottom of Houndkirk Road, a wide dirt track heading out over the moors with stunning views over Sheffield in the valleys below.

Buzzing with ramblers, dog-walkers, runners, 4x4 off-roaders and mountain bikers using the popular trails in Lady Cannings plantation, it’s often referred to as the Roman road, although whether is is actually Roman is still open to question. What is known is that it is an ancient drovers’ cattle route which was improved and turned into a turnpike in 1758 – you can still see the old milestones. It was abandoned when what is now the modern road to Hathersage via Fox House was built. Crossing the oddly-named Jumble Road, it leads out onto the open moors. The Redcar Brook rises here - one of a series of streams that combine to form the River Sheaf, which gives the city its name. Hidden in the heather is God’s Spring which, it has been suggested may have been associated with Harry’s Stone nearby. And as Harry or Harrow is an variation of hearh or hearg , an Old English word for a temple or altar – that raises the fascinating possibility that there was a once pagan sacred site near-by.

Even more intriguing is that the word Houndkirk is another modernisation of an ancient name, Han Kirk (Ankirk) – or Giant’s Church . . . .

There’s physical evidence that this was a significant place for our ancient ancestors at Cicely Low near Parson House Farm at the Fox House end of the moor. There are two ring cairns ­- circular banks of stones round a central hollow. Exactly how they were used is shrouded in mystery, but they were part of prehistoric burial rituals and now they scheduled as a monument of national importance. 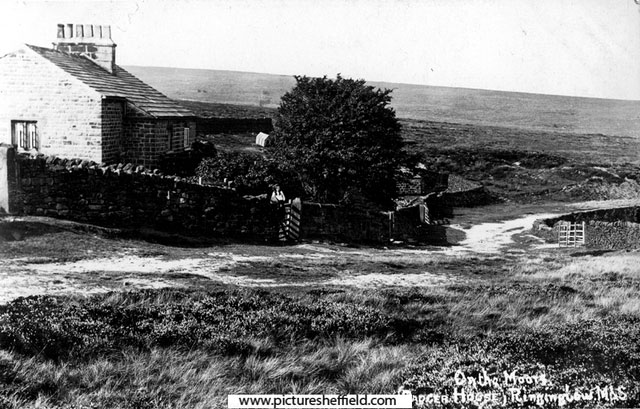 What is beyond doubt is that there was once an inn at Thieves’ Bridge used by drovers. Oxdale Lodge was renamed Badger Houses and the Duke of Rutland’s gamekeeper lived there. The buildings were demolished in the thirties.

Even more recent was the slightly bonkers scheme to distract German bombers heading for Sheffield’s steelworks during the Second World War with a decoy station on the top of the moor. This Heath Robinson-sounding contraption featured oil tanks, tinfoil, lighting and wiring and was supposed to mimic the sparks from tram wires, the glow from furnaces and the flashes from the trams. The idea was to get the planes to drop their bombs away from the city. How successful it was is unclear, but the concrete base of the control rooom where the operators tried to get the enemy to literally drop bombs on them still exists.

So, the next time you are up there, think on: you’re literally in the footsteps of everybody from prehistoric pagans to wartime heroes. There’s a place I know in Sheffield…Cholera Monument