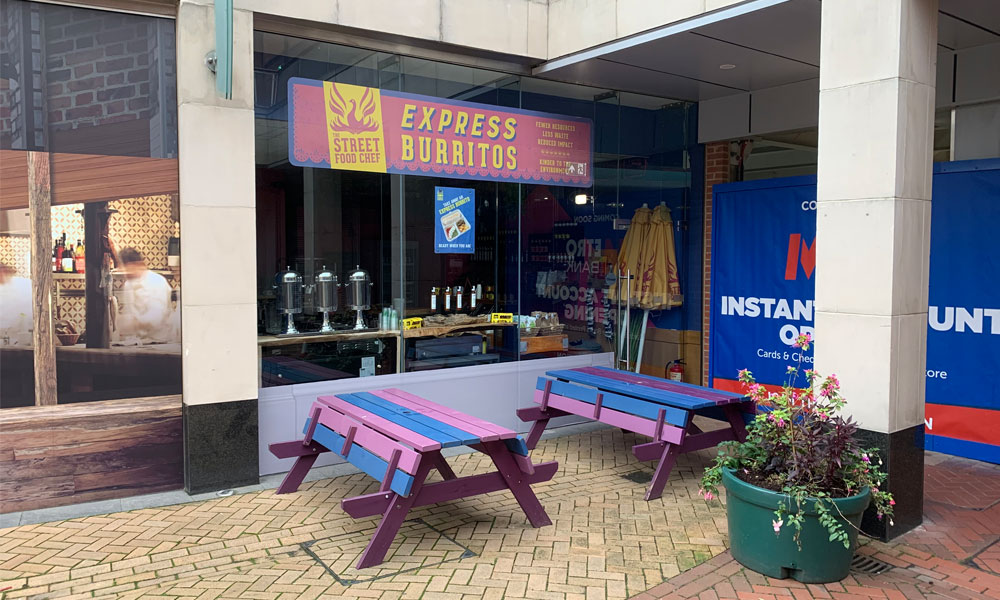 The Burrito Express opened last week and has transformed the unit previously operated by Starbucks into a ‘reduced impact’ Mexican fast-food restaurant.

The idea is that, for the next five months, and hopefully beyond if the trial goes well, Street Food Chef will operate a slightly reduced menu in Orchard Square, serving ready rolled burritos on-the-go for lunch time crowds.

Co-owner Richard Gollabnd told VIBE: “This is a new concept shop for us. It’s what we sell at the events that we’ve been attending for the past seven or eight years. So a ready rolled burrito with hopefully no queuing. You come in, point and go! It’s kind of like our version of a Tesco Express concept, if you want to think of it that way!

“We’re trying to vary the selection as much as possible and we’ll have four, five or six options, each lunch time, which will eventually be eight, but we’re trying to gauge the demand at the moment, because we don’t want any waste.”

Prices start at a reasonable £4 for a burrito, which can be ‘suped up’ for an extra £2, allowing customers can to eat in and take advantage of the help-yourself salsa bar options.

As well as the hot food take-away, there will also be frozen burritos and chilled burritos available to take home, as well as a dried chilli pick and mix priced at £4.95 per 100g and various bottles of sauces you can takeaway, including a chilli paste in a recyclable bottle, which you can take back to be filled up for £3.

Reducing waste is something that is very important to the Street Food Chef team, who went completely plastic free back in January of this year. Richard said: “We’re trying to think of as many eco-friendly options as possible, and all our packaging is biodegradable.”

For more info head over to the Street Fodd Chef’s website in the next few days.