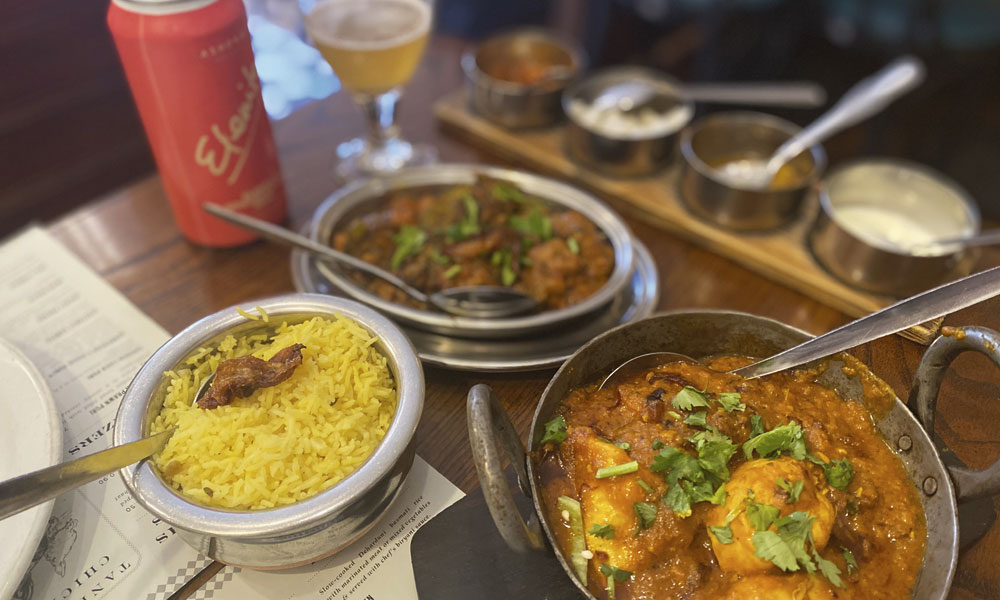 Something new is brewing at Ashoka, writes Richard Abbey.

I wouldn’t say I’ve been to Ashoka a lot but when owner Rahul Amin started to explain the menu and recommend dishes, I found myself repeatedly saying ‘tried that’, ‘had that’, ‘loved that’… Sorry, Rahul.

Truth is, it’s hard to find a weak spot in Ashoka’s menu and if you stray from the tried and tested – Karamelised KashmiriTM, Taxi Driver CurryTM for example – you still know that whatever you order, it’s going to be fantastic, as this recent visit proved.

When most pubs and restaurants reopened on 4 July, Rahul decided to remain closed and took his time to consider the best way to bring back the Ashoka experience without having to make too many compromises.

Anyone who’s been to the Ecclesall Road restaurant will know it’s a small, but achingly hip, space with bench seating down the left-hand side and booths on the right. The layout is still the same but Rahul has introduced movable screens between tables, which can be positioned accordingly depending on the size of your party. They match the existing furniture perfectly and allow as many diners in as possible without compromising social distancing rules.

There’s still plenty of friendly and familiar faces amongst the waiting staff and service is exemplary, as always.

Back to the menu and after shooting down Rahul’s initial suggestions – again, sorry – we made our selections. There was no changing the poppadoms (90p) and 1960s pickle tray (85p per person) to start and they paired perfectly to something I hadn’t tried at Ashoka before – their very own beer.

Rahul has worked with Triple Point Brewery on Shoreham Street to create two beers; #ReytBev is an easy drinking 4.1% ABV session lager, perhaps less gassy than you’re used to, while ElenitaTM is a citrusy and vibrant 4.5% ABV session IPA. Both are priced £5.25 and served in 440ml cans. I particularly liked the India pale ale; it was incredibly fresh tasting and complemented our curries deliciously.

Aside from the own brews, there’s a good selection of craft ales at Ashoka with offerings from the likes of Thornbridge, Loxley and Abbeydale breweries as well as Brewdog and Samuel Adams. My wife eschewed the ale offering, opting for a Hendrick’s gin and tonic (£7.50, large) instead.

Suitably watered and appetites piqued, we moved onto our starters – cricket pakora (£4.90) for me and 48-hour chicken tikka (£7) for my better half. The pakoras, of which there were four, are based on grandma’s mixed vegetable recipe and were traditionally served when India played cricket. There was no sound of leather on willow on this occasion, or shouts of ‘owzat!’, but they were a treat all the same, crispy on the outside, light and fluffy in the middle and packed with a delicate spicy flavour. The chicken tikka, which had been marinated for two days, had that vivid crisp, red appearance and was deliciously moist in the middle.

Ashoka do things a little differently with their curries, which are available with chicken (£12.50), lamb (£13.50), mixed vegetables (£11), prawn (£12.50) or king prawn (£14). Flavour comes first, so, for example, if you like sweet onions try a Karamelised KashmiriTM, fresh spinach opt for Mr Singh’s Saag KaraiTM, or roasted cashew nuts, the Makhan-Wallah. Strength of spice is advertised on the menu but each dish can be cooked to preference.

My Kalcutta KaraiTM, served with chicken, had a classic ginger and garlic base with added fresh green chillies for a spice hit. It ticked all the boxes for flavour – fresh, aromatic with plenty of heat.

Ashoka first opened in Sheffield in 1967 and is one of the city’s original Indian restaurants. I say this as founder Kamal Ahmed provides the inspiration for my wife’s dish, Lamb Methi Special, which is listed on the menu as his favourite curry. A rich and earthy fenugreek sauce was the perfect partner to some of the softest lamb we have ever tasted. Rahul explained that the lamb is poached first to make to even more tender, to the point where you shouldn’t need a knife to cut it. We certainly didn’t on this occasion; it was tremendous.

For sides we kept things simple – pilau rice (£4) and garlic charcoal baked butter naan (£3.50). We didn’t need anything else.

Chatting to Rahul throughout our meal, he confided that the lockdown period gave him time to reflect and he wondered about coming back at all. Thankfully, he admitted that re-opening has re-ignited his passion and a full restaurant is testament to how much the people of Sheffield love this place. I don’t think they’d be letting him go anywhere quite so soon.

Small changes aside, the whole experience didn’t feel compromised at all and was the same Ashoka we’ve come to know and love. We’ll be back, and may even revisit some of those favourite dishes.