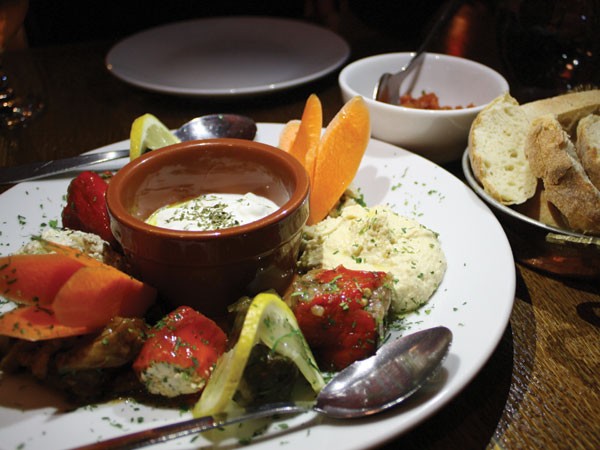 Succulent and spicy, the food at Lokanta lives up to its high reputation.

There are only so many rave reviews you can listen to before satisfying the insatiable desire to be part of a conversation. And after hearing so many positive comments about Lokanta, the Turkish restaurant on Glossop Road, a few years ago, I was dying to give it a go.

Since succumbing to the status quo (it turned out to be an excellent decision) I’ve been back several times since. Trust me, once you get a taste for the kind of succulent, gently spiced lamb that the Turks do so well, very few meaty alternatives match up.

It’s now a well-established part of the Broomhill restaurant scene, with a traditional menu and contemporary setting that hit just the right notes.

On my most recent visit, the rain was lashing down as my partner and I hurried through the doors at 6.30pm on a Saturday night. The first diners of the evening, we were led to our window seat and left to dry off while perusing the extensive menu.

Even on a cold and blustery night, rookie diners may have been concerned by the lack of company – but we knew better. By the time we’d chosen our starters and mains it was already beginning to fill up and, when we left a couple of hours later, every seat in the house was taken.

Unable to decide on just one starter – there’s a whole A3 side’s worth of hot and cold dishes to tempt you – we opted for the cold meze taster plate. The assortment of hummus, cucumber mint yoghurt, pistachio spread, flame roasted pepper with feta, fried aubergine and tomato salad, cous cous, stuffed vine leaves and stuffed pepper was a delight and the perfect way to put their menu to the test.

Not content with just a multi-faceted starter, my partner chose the mixed grill for his main. I watched in amazement as he polished off grilled pieces of lamb, chicken and halloumi cheese, lamb meatballs, Turkish spicy beef sausage, along with the rice, sautéed potatoes, grilled tomato, pepper and barbecue sauce that come with most mains. He savoured every mouthful and was particularly enamoured of those flavour-packed meatballs.

My lamb shish was a more modest affair and great for anyone with a more normal appetite (no offence, dear). Of course the marinated lamb skewer lived up to its own sky-high standards and each additional element – especially that beautifully buttery rice – was spot on. I chose to accompany it with a chilled glass of Cankaya wine and from the first sip could easily see why it’s ‘the best known dry white in Turkey’, as stated on the menu.

For dessert, my partner tucked into a refreshing scoop of Turkish delight ice cream by Sheffield’s own Yee Kwan while I enjoyed the real deal. The authentic little cubes were a far cry from the gloopy purple packets of my childhood: firm, flavoursome and packed with pistachios.

At the end of another great meal at Lokanta, there was no doubt as to the verdict: another rave review to add to the ever-growing list.