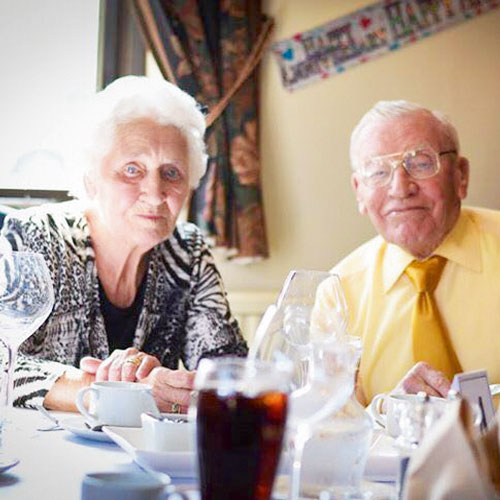 Finding love at first sight was not the first thing on Kenneth Ashton’s mind when he was out celebrating his 21st birthday at a pub in Broomhill.

However, one lady caught his eye on that particular evening and 70 years later, the Waterthorpe couple certainly have an unbreakable bond.

When Trudy 90 and Kenneth 94, began their romance he was on leave from the army. The pair, who had never met despite having the same circle of friends, instantly made a connection, although there was one slight complication as Trudy was there with another man.

“She walked in with another chap, but she left with me so I must’ve done something right,” says Kenneth.

However, this courtship faced another threat as Kenneth was stationed in the Middle East and Italy in World War II. Although was fighting for his country in life-threatening situations, he still managed to write to Trudy every day.

On his return, the pair married on 5 April 1947, Kenneth’s birthday, at St Silas Church.

“We put on a do at The Broomhall Tavern after, but it wasn’t splash as we were still on rations. Friends and family saved up coupons for us so we could buy a few things to put on a nice spread after the ceremony.”

The couple went on to have two children, five grandchildren and then nine great-grandchildren. To this day they ensure the family all gets together at least once a year, usually at their annual anniversary party which has become something of a family tradition.

This year, to celebrate their platinum wedding anniversary, they had a family meal at The Sitwell Arms.

“This is something we do year by year, as we don’t see some of the family very often it keeps us in touch. When anything happens to us, we hope that the family will carry on the tradition.”

The couple have overcome numerous hardships during their time together. Trudy not only had a nasty accident at work, but battled cancer for the second time eight years ago. Trudy was told by doctors she wouldn’t live past two years without a major operation which took her out of action for several weeks. Kenneth, an avid Sheffield United fan, is still full of praise and admiration for his wife.

“She’s come out the other side, she’s brilliant and the strongest person I know,” says Kenneth.

“After everything, she still does anything to help anyone – looks out for neighbours and bakes cakes if people are ill.”

After 70 years of marriage, the couple’s love and respect for each other has stood the test of time. So what’s their advice for a lasting marriage?

“We put it down to the fact we help each other as much as possible and always enjoy each other’s company.”