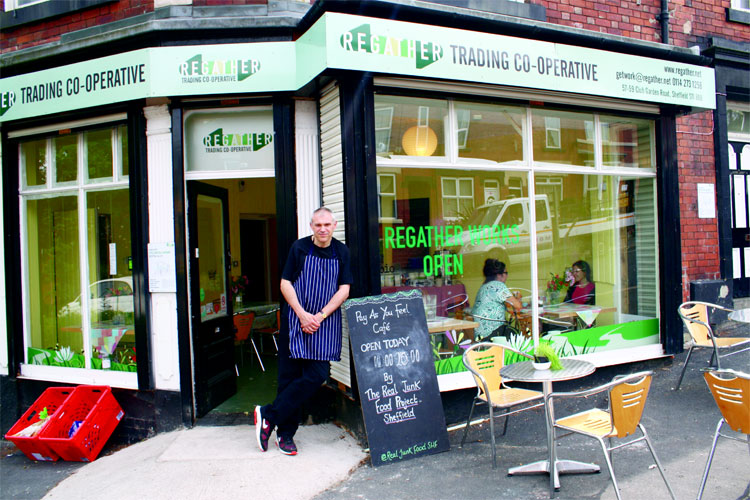 As part of the company’s 30th anniversary drive to give something back to the community, RMC Media’s Chris Wilson spent some time volunteering at a new cafe that takes a unique approach to sourcing ingredients. Here he describes how he got on.

So how do I find myself wiping down tables and chopping vegetables in a café where people are invited to ‘pay what they feel’ for their meal?

It starts with the fact that 15 million tonnes of food is ditched in the UK every year. That’s three wheelie bins of food per person, making us the most wasteful nation in the EU. Food for thought – especially when, like me, you are fortunate enough to have a job that involves quite a lot of eating out in rather nice restaurants across Yorkshire and North Derbyshire.

I first became aware of The Real Junk Food Project, Sheffield last summer when a friend told me she had spent the day after Tramlines, a weekend music festival in Sheffield, helping out in a pop-up restaurant where the main ingredients consisted of food left over after the bands moved on and the fans went home.

The food was not past its sell-by date or contaminated in any way, but after events like this, the simplest thing for the vendors was simply to dump it and move on to the next event. Most of it was destined to end up in a landfill site.

A small band of volunteer chefs, kitchen hands, pot washers and general helpers was trying to do something about this. Diners could pay what they could afford, or what they thought the meal was worth. Those who believed in the cause and could afford it might decide to pay more; those with empty pockets could volunteer, washing dishes in return for food.

It turned out this pop-up restaurant was far from a one-off but part of a movement that began when Leeds-born chef Adam Smith found himself working on a farm in Australia where he witnessed the vast scale of food waste, in agriculture and the catering industry.

He came home and set up a café in Armley, Leeds, in 2013. There are now 95 across the country, staffed by volunteers cooking food that would otherwise go to waste, donated by local businesses, supermarkets, catering events, local households, food banks, farms and wholesalers.

The Real Junk Food Project, Sheffield is now a year old and has grown from pop-up events to having its own café, at Regather Works on Club Garden Road, very close to London Road’s bustling array of restaurants, pubs and shops. Project director Jo Hercberg spent a decade in the online travel industry before deciding to leave the corporate world and do something she really believed in.

“Hopefully there will be pay-as-you-feel cafés all over the country soon,” says Jo. “But if the message spreads, and people start to think and act more about food waste, there will come a time when they close down because they won’t be needed.”

As for my own small contribution, a morning spent wiping down and setting tables, putting the chalk boards outside and making a salad to go with the lunchtime quiches that Jo had cooked the previous day, was rewarding, and fun too.