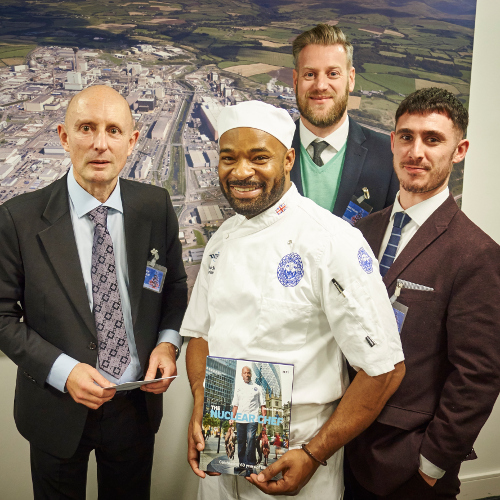 He’s known as the Nuclear Chef – and things were heating up in the kitchen when Andy Maddix launched his new cookbook.

Fortunately it was just the delicious canapés being dished out to guests who’d gathered to toast Andy’s stunning recipe collection.

NRI, or Nuclear Risk Insurers Ltd, are part of an international pool of companies responsible for insuring nuclear installations across the globe. It’s an important job – so NRI needs to ensure its clients, consultants and advisers are well fed. Enter Andy Maddix.

Andy’s love of food stems from his younger days helping to cook at family weddings. As a chef, he cooked in restaurants around the world, before moving into corporate cooking – including a spell at 10 Downing Street, making meals for Prime Ministers Blair and Brown.

At NRI, Andy cooks for the company’s wide roster of international associates – meaning he has to cater for a broad range of global tastes. Inspiration comes from Andy’s own Jamaican heritage, as well as the exotic flavours and ingredients he finds at London’s Borough Market. These influences are reflected in the 70-plus recipes which appear in ‘The Nuclear Chef’.

The 192-page publication was launched at NRI’s 60th anniversary party at the company’s headquarters in London. The RMC Media team were in attendance to congratulate the new author on his achievement, alongside acclaimed photographer Tim Green, whose pictures brought the book to life in some style.

Are you a corporate chef longing to see your recipes in print? Does your company have a kitchen superstar worthy of published praise? To find out how RMC Media can help, email martin.edwards@rmcmedia.co.uk.